SMS still alive and kicking on back of applications 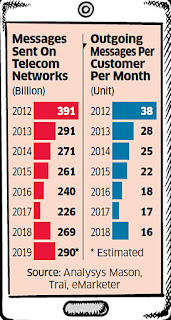 NEW DELHI: If you thought that the humble SMS, or short messaging service, has died a silent death thanks to WhatsApp, Telegram and others of their ilk, think again. As of 2019, it’s a business worth more than $500 million with about 22 billion messages travelling on telecom networks every month.
But it’s not the typical person-to-person messaging that has grown — that category has flatlined. What’s booming is app-to-person messages, thanks to the plethora of apps that users are downloading to their smartphones. These in turn are peppering subscribers with text messages — notifications, advertisements, promotions and transaction confirmations. The segment has grown 20% every year since 2014 to 210 billion messages in 2018, according to industry data, and is expected to reach 265 billion this year. Five years ago, the number was less than 100 billion.

“There is a surge in A2P SMS or enterprise messaging,” said Bharat Bhargava, partner and leader, telecom advisory at EY. “Adoption across verticals including marketing, banking, and retail for OTP (one-time-password) confirmations, transaction alerts, notifications, branding and marketing are on the rise,” he added.
More than 95% of the traffic comes from within India, typically generated by International messages from apps like Google, Facebook, Twitter etc. make up the rest.
Expectedly though, the number of monthly messages sent by a subscriber has halved to 16 at the end of last year from 38 in 2012, according to data from Analysys Mason. The volume of person-to-person messages within India was then at 391 billion, before the advent of over-the-top apps such as WhatsApp, Facebook Messenger and others. That has dropped every year since then to 226 billion in 2017.
The rise in app-to-person messages has offset the fall in person-to-person messages over the years , analysts said.

Indian telcos, especially the older ones, are pleased about the shift. They charge the app companies 10 paise per message terminating within India and Rs 1 for international ones. Total revenue accruing to the telcos is estimated at $515 million (Rs 3,576 crore) in 2019, up 145% from $210 million (Rs 1,457 crore) in 2017. That helps in a sector under financial stress amid stiff competition.
“Consumers are increasingly adopting digital for transactions and using apps to serve diverse needs,” said a spokesperson for Vodafone Idea, the country’s largest carrier. “Every such digital engagement requires validation and authorisation via message.”
Reliance Jio Infocomm and Bharti AirtelNSE -1.36 % didn’t comment on the size of the business or its growth.

“It’s a win-win for all — operators get an increasing revenue stream, both price and volume wise. Enterprises find it a most economical medium to communicate and all types of consumers have access to it,” said Himanshu Goel, chief executive of Syniverse India, which aggregates messages between enterprises and telecom networks.

Messaging Trends to Be Aware Of! SMS, aka Short Message Service, have established high open-rates recently. According to Techped... 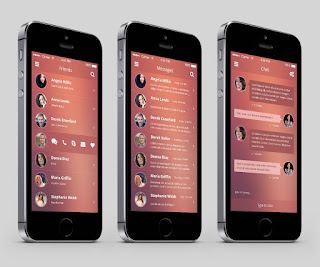